ALL THE BEST TO ALL Y’ALL. “WHERE THERE’S SMOKE, THERE’S MEAT!”
– CLARENCE “PORKCHOP” DUPREE 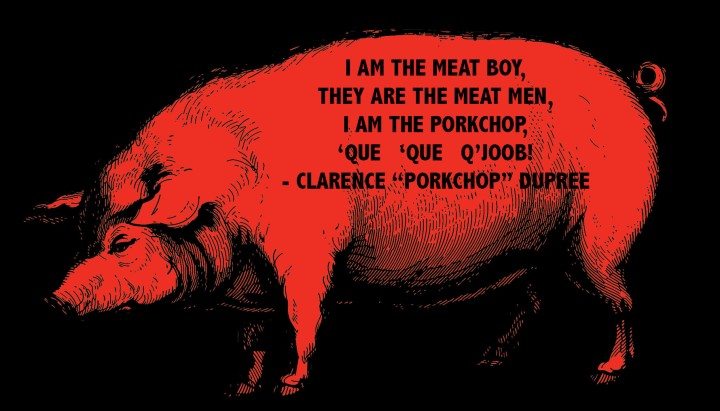 What a fine day it was to smoke three racks of St. Louis style ribs and enjoy excellent conversation and some fine bourbon with a good friend. If you read yesterday’s post, you know I seasoned three racks with three different rubs that I’ve been working on and wrapped them up for today’s cook. 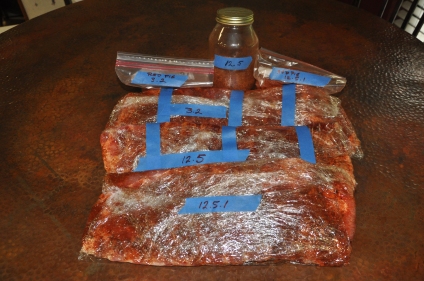 Fired up the pit about eleven this morning and had a good fire going by noon. Started mixing up the baste and suddenly: NO BAY LEAVES! Perish the thought. Off to H-E-B and back with just what I needed to finish up the wet portion, and put those racks into the Hasty Bake. Fuel? Charcoal, oak, apple. Sa-weet Smoke! About two hours in, we’re looking good and it’s time to start the basting. A little apple juice, Worcestershire, some vinegar, onion powder, a little rub, some 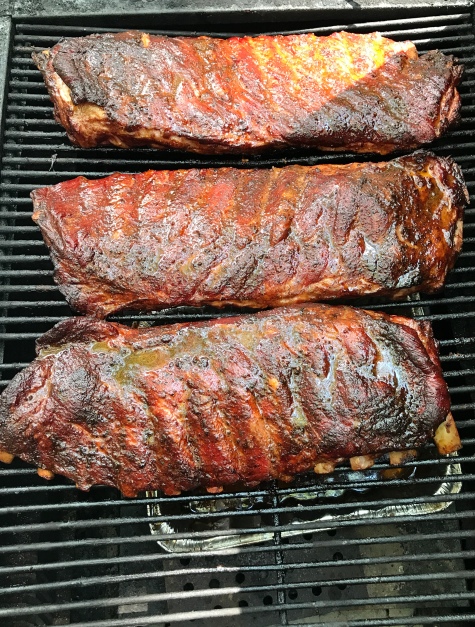 cayenne and that bay leaf I’d gone to fetch earlier, and I’m ready to put on painter’s whites and start brushing it on.

YEAH, BUT HOW’D THEY TASTE?

Pretty darned good, as it turns out! The differences between the three rubs were slight but noticeable. The 3.2, one of my earlier creations is a simple, smooth rub, with a good balance of sweet and spice. Version 12.5 had excellent heat but I found it a little heavy on the sugar.

The 12.5.1 came it at pretty much just right. Balance, good savories and a little hint of heat that lingered in the finish and left the flavor of the rib to stay with you.

Many thanks to my good friend and excellent cook Darwin, of “Giant Barbecue” for helping me lower the weight of that bourbon bottle and for the excellent conversation and fellowship as the smoke was rising on those tasty st. Louie’s

All the best to all y’all. 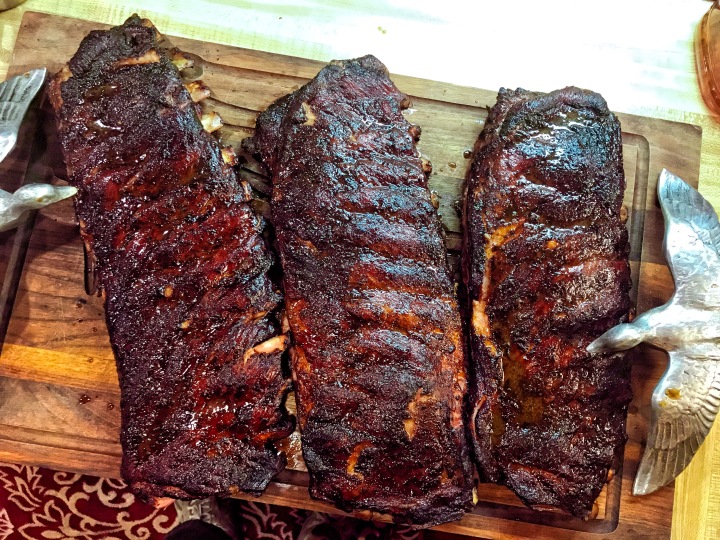 Been mixing lots of spice the past few days. Hanging out in the kitchen with spices and blender and spreadsheets, putting some new ideas together for pork rubs. What makes this such an interesting challenge is the test of hitting several goals simultaneously: I start with the nature of the heat I want in the rub and put together a selection of chilies to make a complicated heat that moves across the palate through the bite, but doesn’t over power the other elements of the rub. Then there’s the quest for that perfect balance of salt, sweet, heat and savory.

Add to that the question of how long the rub needs to be on the meat. Do I want it to work on the meat for a day or a few hours? For today’s purposes,

By the time it was all said and done, I’d put together three different rubs, each of which promised an interesting profile. Good thing I had three rack of ribs!

The rubs went on at 11 am for a midday cook tomorrow, so they’ll have had a solid 12 hours on the meat by the time the smoke’s risin’ tomorrow.

Stayed tuned, amigos. We shall see.

All the best to all y’all. “Where there’s smoke, there’s MEAT!”
– Clarence “Porkchop” Dupree

“M” IS FOR MIX UP A RUB
THAT GOES ON A PORKCHOP!

Well, it was a good day to duck on out of the South Téjas heat and mix up a rub. We’re workin’ hard to bring these beauties to market, and they should be out soon. In the meantime, experimenting in the kitchen and mixing ’em up here at home is just a batch of fun. You KNOW what I’m sayin’! 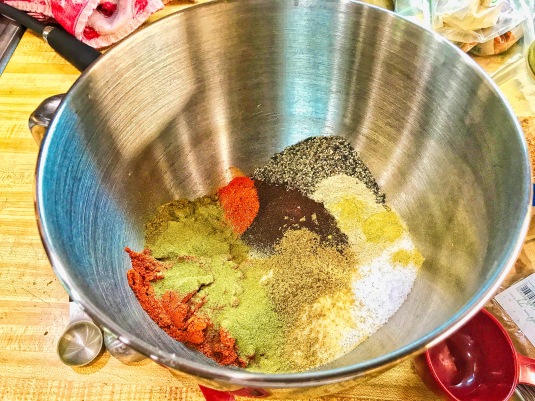 All the best to all y’all. “Where there’s smoke, there’s MEAT!”

BUILD A FIRE AND WATCH IT IN 100 DEGREE HEAT? NOT TODAY…ROAD TRIP!!!

What a concept! My
daughter in Waco called and said “Let’s meet for lunch!” I hadn’t been to Louie Mueller’s in a year or two, Mueller’s is about half way between us, and the Texas Monthly Top 50 list is just out. Let’s go see if they still deserve their spot.

You cannot deny the vibe of Louis Mueller Barbecue. It feels like history happening! Like the fabled albeit not as good as it used to be Smitty’s in Lockhart, it makes you think “if the Smithsonian were going to have a barbecue joint, it would feel like this.

And plenty of folks know it. The wait was over an hour, but hey, we made some new friends. There was a couple in front of us were eating their way through the Texas Monthly challenge. We had a grand old time comparing notes, talkin’ who’s on the list, who’s not, whatever happened to so and so, you know, they used to be on every list, what ever happened to them? 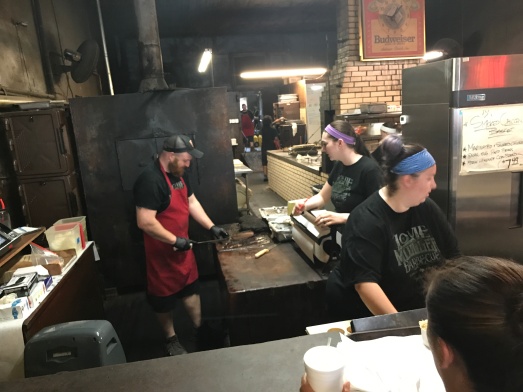 But we persisted, stayed the course and, when we finally made it to the front,

ordered up: Ribs, brisket sausage. The Trinity of Texas Barbecue! Oh, and some pulled pork sliders, in a not to the 21st century.

Props to the man with the carving knife! He was the only guy cutting meat on this day and he was DOIN’ THE JOB!: Handled our order with a smile and great personality, and that knife with great skill.

About the coke sign: Way cool, but hey, it’s Texas barbecue so I opted for the Big Red. If there’d been a Big Red sign this cool, you’d be looking at a picture of it.

PATIENCE WON THE DAY AND FINALLY IT WAS TIME TO EAT: If you are steeped in Texas barbecue tradition, this was your meal. The brisket was rich, salt and pepper, black bark good. The ribs were smoked to a perfect bite with a solid South Texas flavor profile. This ain’t Southern, it’s South Téjas! The sausage? Well, sadly a bit of a weak link, imnsho. Personally, I like a coarser grind than the Mueller sausage but that’s what makes a meat market.

Sides? Yes, there were sides. 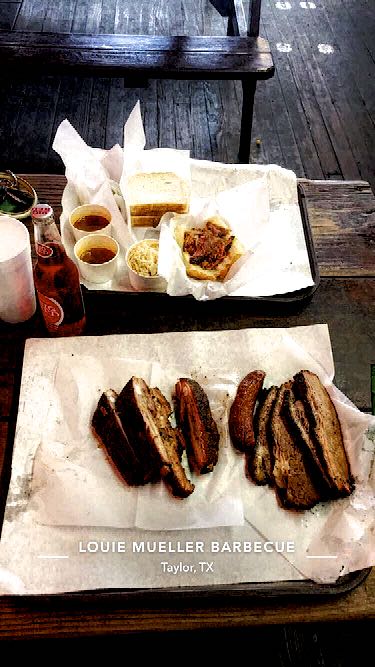 But… who cares? What we really tasted in this outing was a taste of Texas barbecue history: taste rooted in a time where the fundamentals won the day.  A time less chef centric and before such a ting as sliders.

Bottom line: If you get south of Nebraska, make sure you get by Louie Mueller Barbecue in Taylor, Texas.

All the best to all y’all. “Where there’s smoke, there’s MEAT!” – Clarence “Porkchop” Dupree

What could be finer that a long HOT Texas Father’s Day, relaxing with a dry brined brisket in the smoker, cold beer and great U.S. Open. Spent the week experimenting with some new rubs and when today got here I was ready.

Fell asleep on the couch for a while – hey, it’s part of the ritual – but not long enough for the beer to get warm. All is right with the world. And in case you’re wondering: Sauces? We don’ need no steenkin’ sauces! 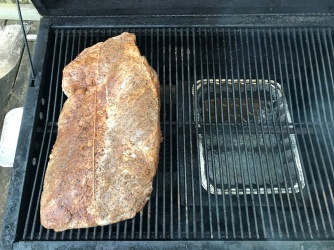 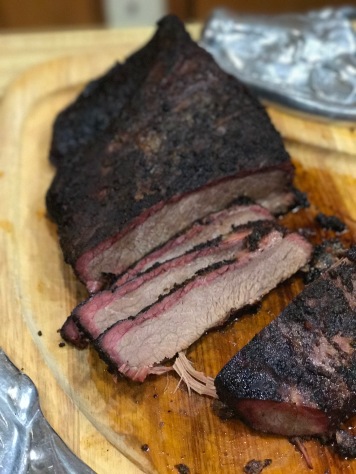 ALL THE BEST TO ALL Y’ALL!
“WHERE THERE’S SMOKE, THERE’S MEAT!”
– CLARENCE “PORKCHOP” DUPREE

…COOK SOMETHING THAT’S NAMED AFTER YOU. 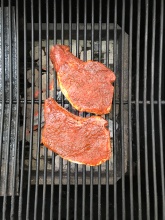 All the best to all y’all.
“Where there’s smoke, there’s MEAT!”
– Clarence “Porkchop” Dupree

…COOK SOMETHING THAT’S
NAMED AFTER YOU! 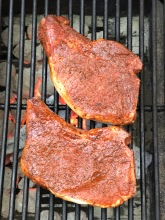 All the best to all y’all.
“Where there’s smoke, there’s MEAT!”
Clarence “Porkchop” dupree

Barbecue makes old ones feel young,
Barbecue makes everybody someone.
If you’re feelin’ puny and you don’t know what to do
Treat yourself to some meat….eat some barbecue.
– Robert Earl Keen

Bessie Smith said:
Gimme a pigfoot and a bottle of gin.
To which Clarence “Porkchop” Dupree replied:
Bessie, girl, y’oughta make a song outta that: