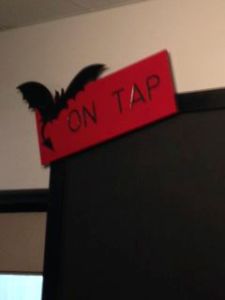 It’s been about 16 months since  word first leaked out that brewer/economist/entrepreneur Scott Metzger had identified a location for the next iteration of his successful Freetail Brewing Company. Not content to keep Freetail as a brewpub, Metzger has piloted the operation’s growth into a full fledged brewery. Freetail opened its doors to family and fiends last night, with the Grand Opening scheduled for this coming Friday in the new facility at 2000 South Presa in Deep Southtown San Antonio.

Not sure what I expected but let’s just say my expectations were exceeded on every level. The facility is impressive, some 30,000 square feet of brewing,

brewing, bottling and beer bar withplenty of space to accommodate the growth of the business as is likely to be warranted by demand.

(For the initiated the name “Freetail” derives from the Mexican Freetail Bat. Each year some 20 million Freetail bats take up residence in the Bracken Bat Cave, just north of San Antonio. Theses bats comprise what is believed to be the largest bat colony in the world.)